A traditional greeting among  the Maasai people of Africa queries, “how are the children?” … The expected response:  “the children are well?” 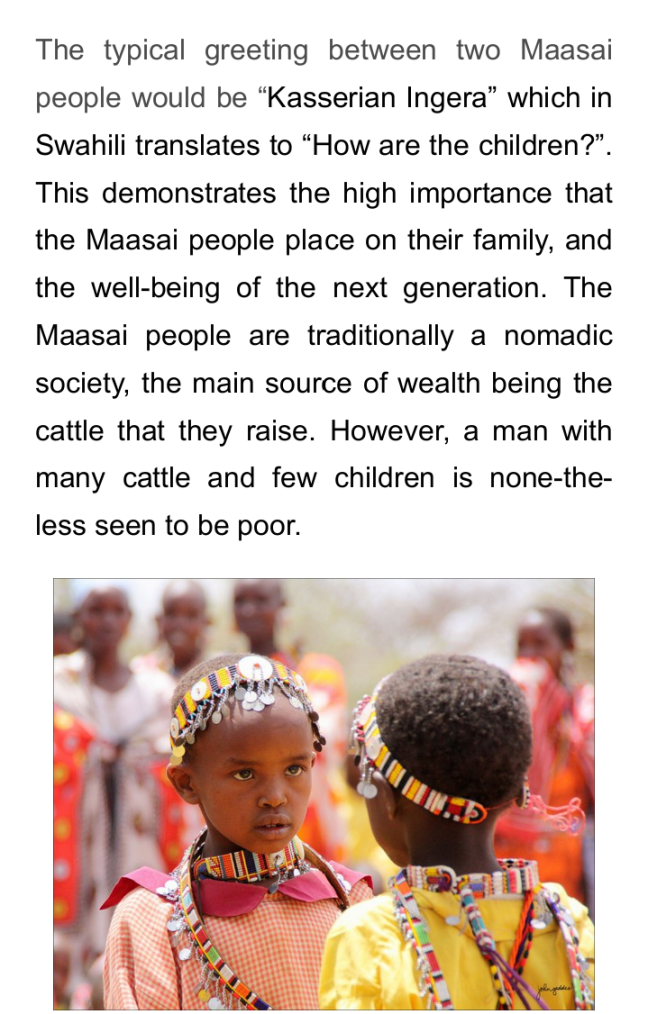 Here I am greeting you all – children and adults: How are my children? Please check in, are you all well? Let me know. This is my say so on the matter.

Give Parents a Choice so Children can have a Chance

During the 1990’s, as Chairman of a Palm Beach County Charter School’s Board, I was privileged to attend several symposiums focused on the educational choice movement. During this period a lady speaker at one of these occasions, explained this Maasai salutation, introducing it as metaphor for the state of childhood development in communities across America. Never had I heard about the greeting.

The decade of the nineties, ended the 20th century, but launched a new generation of children – Millenials! And these symposiums proposed how we might educate them, not with old school methodology, but through educational options – Vouchers, Charter Schools, Alternative Institutions, and the like.

Stay with me, please. We certainly agree that when the children are well, they are well educated. The disagreement is born when different systems of learning are launched and legislated.  Choice became a controversial word. Adherents of traditional public schools opposed the initiative, wary that it was public funding for private schools, and suspecting a subtle return to segregation in education because the advance advocates were mostly white. Proponents said that they should not have to pay twice if they chose to send their child somewhere else; why pay a portion of property taxes for the school district, plus pay private school tuition.

The term FTE  dollars was touted about a lot. This was the Full Time Equivalent funding allocated annually per student for education. Advocates of Choice insisted the money follow each child to whatever school his or her parent decided to enroll  them. As money is always, this was the source of controversy.

Former School Superintendent for Milwaukee, Dr. Howard Fuller, started a movement, Black Alliance for Educational Options  (BAEO), which hosted an annual conference at Marquette University, Milwaukee. This became Mecca for our Charter’s administration and teaching staff. I got most of my education about these issues during these trips.  The group’s slogan – Give Parents a Choice so Children can have a Chance – epitomized a unique dimension of Educational Choice, a Civil Rights perspective. This group hitched the aspirations of poor Black children to the proposals of richer white interest groups. Fuller and followers did not take the popular position of African American leadership in education that opposed Charter schools, instead they joined and built alliances.

Those political alliances led to some strange fellowships. Republican politicians were the leading advocates of this reform. Thus we, in Palm Beach, looked to the right. “As long as we get this wagon going, it doesn’t matter whether a donkey or an elephant did the pulling,” were essentially the words of our schools Principal.

The elephant had more pull, and was reigned and ready. Texas was already on the move because Governor George W. Bush was committed to Charters – and he would become President. We hoped too that his brother Jeb, as Governor of  Florida, would endorse and finance our enterprise in Palm Beach County . I was actively recruited by the Black  Republicans who were committed to portraying new faces for their party. The chair of our advisory board, was the County Chair for Republican party. On the Black hand side, we were Civil Rights Activists and Grass Roots organizers playing Ebony and Ivory, romancing with those who to most People of Color were the sworn adversaries of black progress. Sleeping with the enemy.  I smile at this today, fondly remembering the invitation and complimentary $100 tickets to a Republican Fundraiser, to mingle among the prestigious crust of Palm Beach Island. Guess who’s coming to Dinner.

To me it was not contradictory. Democrats promise to open the door, but will not always let you sit at the table. Republicans say knock at the door, and they will open it for you, but neither are you guaranteed a place at the table.  We are, to face reality, The Help for both partisan groups, entering by the rear to serve, but not to dine and make decisions with power broker guests.  I like what Shirley Chisolm, former presidential candidate and Congresswoman, advised black leaders, “If they don’t give you a seat at the table, bring a folding chair.”

Resourcefulness and volunteerism proved to be our folding seat, because we never got the invite to sit, not even in the kitchen. No surprise. As a people, our ancestors could have told us so. Instead, they had to be creative and persistent. So should we. Follow along, please.

Our forerunners always knew that education opened the way to a better life, to find employment and wages was the means of escape from poverty. From enslaved Africans learning to read the bible, to contemporary urban children gaining access to computers and new technologies. Black parents continue to desire for their children a chance to be well. And, further, they need a curriculum that best enables them to be well educated.

It means shifting paradigms. Many might not recognize the name, Kwame  Nkrumah, leader of the African Independence Movement in Ghana. Here is his take on education.

“INDEED, EDUCATION CONSISTS NOT ONLY IN THE SUM OF WHAT A MAN KNOWS, OR THE SKILL WITH WHICH HE CAN PUT THIS TO HIS OWN ADVANTAGE …

EDUCATION MUST ALSO BE MEASURED IN TERMS OF THE SOUNDNESS OF HIS JUDGMENT OF PEOPLE AND THINGS, AND IN HIS POWER TO UNDERSTAND AND APPRECIATE THE NEEDS OF HIS FELLOW MEN, AND TO BE OF SERVICE TO THEM.”

Education as Personal Enlightenment is a suitable pardigm, but to societies emerging  from the darkness and poverty of colonial underdevelopment, it is insufficient.

This is my frame of reference.  It is post WW II, Bahamas. Here are two parents, both with only the bare necessities of learning in reading, writing and arithmetic. They made earnings in the carpentry and seamstress trade, patched together a living for 10 children, and scrapped extra to send the older siblings to high school and college – high achievement back then. My older sisters became certified teachers. The younger siblings, me included, got help from them. Their meager earnings were stretched. They also managed to raise our standard of living. The first automobile in the family was financed by my sister, and was proudly parked in front of the house that Daddy built from foundation. Their wages purchased modern conveniences and new furniture for our “big house.”

Metaphorically, we were building a generational ladder to climb out of impoverished conditions, as each age group matured and matriculated, they added higher rungs. As Nkrumah wrote, education is empowerment to serve and transform families and communities.

Look where God has brought us – from a mighty long way

Can my millenial, post-modern children comprehend what has progressed in just one hundred years? As the world welcomed, with awe, the twenty first century it was my entitled expectation for all of the sons and daughters to attend college. Nothing less. When the 1900’s arrived, think for a minute, what were the desires of our ancestors?

Grandpa George and Grandma Gold, on Mama’s side, lived in a Bahamian Out Island, Acklins,  remote from the capital city of Nassau; fishing and farming were their livelihood. Similarly, my paternal grandparents, Napoleon and Lena survived in the Berry Islands. My father Audley was apprenticed to the carpentry trade in a tourist resort, ran by a philanthropic millionaire woman during the Great Depression  and WW II years. Bahamians remember and bless her for the employment opportunities during those lean times. He met Mama, Abby, after she also migrated to that resort to find work. They dreamed big enough to move into the capital city and to purchase land for a home. The post war years bought construction and tourism to Nassau – good times in those days, despite the limited opportunities due to colonial segregation.

We grew up wearing starched shirts and skirts, school uniforms, singing “God save the Queen.” But, after grass roots reform, we also experienced the lowering of Britain’s flag and the raising of an independent Bahamas flag. Schools were desegrated in my teenage years, the 1960’s. In the 1980’s, as bold as my parents were in moving from the Out Islands to Nassau, I moved my young family to South Florida. Today, these children are Americans. They atttended college, and have left home, meaning South Florida, for other parts of the USA.

Vocation and education have been the impetus that moved my family, in each generation, from Out Islands of Bahamas to cities of the USA.  The children of each era advanced beyond parents in education, employment and enterprise. In my imagination, had someone greeted Grandma Gold in 1914, the year of my mother’s birth,  “How are the children?” She would have replied, “The children are well.” Why? She had already pledged to make a better world for her offspring. In 1937, the year my eldest sister came into the world, Mama would give to the same question, the same answer, for the same reason. Likewise, after my breach birth in 1952, her near death delivery was proof of her goodwill to the children’s future. Because, of their example, I would provide a similar response in 1981, my first child’s birth year. Therefore, in this new millennium, my prayer is that we can echo the sentiments of the customary Maasai greetings.

Let’s conclude. How are our children well – even if they are not really well off. The years working with the Charter School convinced me that education is destined to become the chief resource for overcoming oppression and exploitation, especially toward improving the allotments available to people of color. People can lock knowledge and understanding in their minds, and no one can steal it. However, the training of these children require relevant practices, specific to their conditions. The educational choice movement seemed to be a good option and strategy to achieve those ends. Who knows for sure?

I must leave you with a cautionary note about technology. Remember it is a tool, and we are proving that it can foster both ignorance and education. Those of us who remember newspapers like the Enquirer know that Fake News Is not new. There is no substitute for serious scholarship.  Social media is breeding global friendships, but we still barely know our next door neighbor. The old school still has lessons for emerging generations, as much as older folk need to find bravery to enter a new world. Learning can be revolutionized if we stay connected to both our past – and to our peers.

Frantz Fanon, known best as author of Wretched of the Earth, primarily a psychological profile of colonized personalities – both perpetrators  and victims – issues this challenge. “Each generation, out of relative obscurity, must discover its mission, fulfill it, or betray it.”

I am certain of our mission, though some may disagree on methodologies, which is to teach the children well. Let’s agree to keep the visionary and compassionate spirit of the East African Maasai, and be always inquiring of the welfare of the next generation.

2 thoughts on “ARE THE CHILDREN WELL? ”